So, earlier this week, I had planned to create a card for the Card Sketch challenge over at Stylin Stampin Inkspiration.  I had great intentions…. but then life happened and I didn’t get it finished until now.

But I wanted to send a card to a fabulous lady who just joined my Fun n’ Crafty Stampin’ Up! demo group (got to love that $25 starter kit promotion), so it was the perfect kick to get moving on this card.  Plus, I had such a fun time coming up with it, that I had to share!

This is the sketch I was following:  October Card Sketch

I originally thought I was going to do a Halloween card, and so I started pulling papers and patterns…. but then this came out:

Turns out I was so drawn to the funky Black & White chevron pattern that I started designing the card around it!

So, here is the fun part…. Can you guess the designer paper I used for this card?

Would you believe me if I told you it was the latest Halloween paper from Stampin’ Up?  Hee Hee!  That is right, I totally designed this card around Halloween paper and it looks nothing like Halloween to me!  I love when I can do that with a themed or holiday paper pack.

But yes, the Chevron patterns and the Summer Starfruit pattern both come from this Halloween Pack: 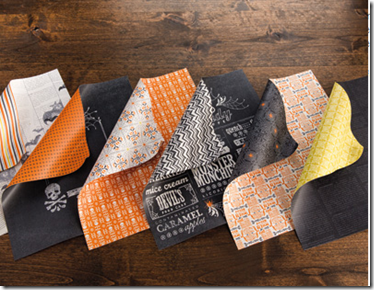 The black and white paper is the pattern behind the “monster munchies” pattern.  The yellow pattern is the one on the right behind the patterned black paper.

The rest of the card came together with little bits here and there.  Like the doily that I cut off two ends so that it is squat and just peeks out from behind the sentiment.  Plus the happy sentiment in Bermuda Bay to mix things up a bit.

And if you are looking for more traditional Halloween ideas using this designer paper, stop back by the blog later this week because let me tell you – I’ve been having a BLAST with this pattern paper (I swear I didn’t know what to do with it when I first got it, but I’ve changed that tune this week!)

2 thoughts on “Fun and Funky Card–Can You Guess the Paper?”

Please leave a comment! I love hearing from you. Cancel reply